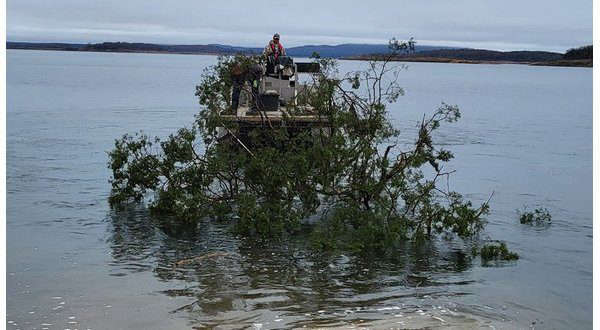 A project to upgrade fish habitat on an area lake is completed.

The full release as posted by KTLO is below:

The Fisheries Division of the Arkansas Game and Fish Commission completed a near all-hands-on-deck habitat project in December 2022, adding hundreds of trees to fish at tractors across Bull Shoals Lake. The effort was one of many the lake has seen to improve angler success at this famous Natural State fishing destination.

Jeremy Risley, AGFC fisheries supervisor in Mountain Home, said lake-wide habitat projects have been in place on Bull Shoals since 1989, but the current effort stood out because of the sheer volume of work completed.

Risley said, “This time, biologists from multiple AGFC divisions and locations in the state, along with staff from the U.S. Fish and Wildlife Service’s Norfork Fish Hatchery and the United States Army Corps of Engineers, replenished 128 existing fish habitat sites from Mountain Creek to Music Creek in the middle section of the reservoir. This effort was part of a larger project covering Beaver, Bull Shoals and Norfork Lakes, funded by a $275,000 grant from the National Fish Habitat Partnership using funds donated by Bass Pro Shops.”

According to Risley, as reservoirs age, woody cover deteriorates, leading to decrease in high-quality habitat. Large-scale habitat projects that add woody cover back into the system are one way to fight this trend. More importantly, they offer locations where anglers have a higher chance of success at locating fish.

“The goal was to install natural fish habitat (brush piles) to significantly improve angler catch rates by concentrating sport fish during summer, fall and winter when these species were historically widely dispersed,” Risley said. With the Corps’ approval, AGFC has established 425 natural fish habitat sites on the Arkansas portion of Bull Shoals Lake since 1989.”

The middle section of the lake isn’t the only portion to receive attention lately. In 2017, the AGFC completed a large-scale habitat project on the lower end of the lake, replenishing 95 existing habitat sites. In addition, AGFC staff refreshed an additional 30 existing sites during a small-scale project completed in early 2018. From 2018 to 2022, AGFC staff periodically refreshed habitat sites at the upper end of the lake.

Habitat coordinates for Bull Shoals Lake will be updated and available in 2023 at: